Next in my series of guest posts about the lessons we learn from travelling is this beauty all about hitchhiking – and what you can learn from it. I’ve sometimes wondered if I should try hitchhiking – I’ve never done it and it makes me nervous, but I’ll never say never, and I know heaps of people have had such great experiences doing it. And Jub from Tiki Touring Kiwi is just one of them. I love the lessons he’s learnt from hitchhiking – and am so pleased he’s shared them for this post.

The one love-hate relationship I have with travel is hitchhiking.

Recently I was in Izmir, the third biggest city in Turkey and I decided to hitch the 323km to Canakkale.

After an hour on the train to the outskirts of Izmir, I stick my thumb out. It’s time to embrace the smells of a busy road complete with trucks billowing out climate-destroying black fumes while squinting into the sun and attempting to smile to try and look like a trustworthy human being. Not exactly the perfect scene for a flawless Instagram travel photo.

I don’t wear sunglasses when hitching. Why? By showing my whole face I look more trustworthy, especially being able to see someone’s eyes. People have confirmed this when I’ve asked if sunglasses would make me look less trustworthy (no doubt someone has studied this).

After an uncomfortable 30 minutes on the side of the road I’m picked up by a truckie, Baris. The legend was going all the way to Canakkale. You beauty! Getting one ride to your destination is the wholly grail of hitching. I’ve learned from hitchhiking that lots of small steps can get you to your goals, but a giant leap is the best.

The funniest (and most dangerous) moment of the ride is when Baris gets the attention of the pickup truck next to us. On the back of the truck are two older females, a younger lad, and stacks of crates full of mandarins. I’ve no idea what he’s saying to them as we drive along at 60km/h but find out when mandarins come flying through the window. Thank god none of the 40 odd mandarins went under the accelerator! Those on the back of the pickup no doubt worked hard all day, but didn’t hesitate in throwing us a dozens of mandarins. People are generous.

That is one of many moments that make my love of hitchhiking stronger than feelings towards the not-so-fun side. 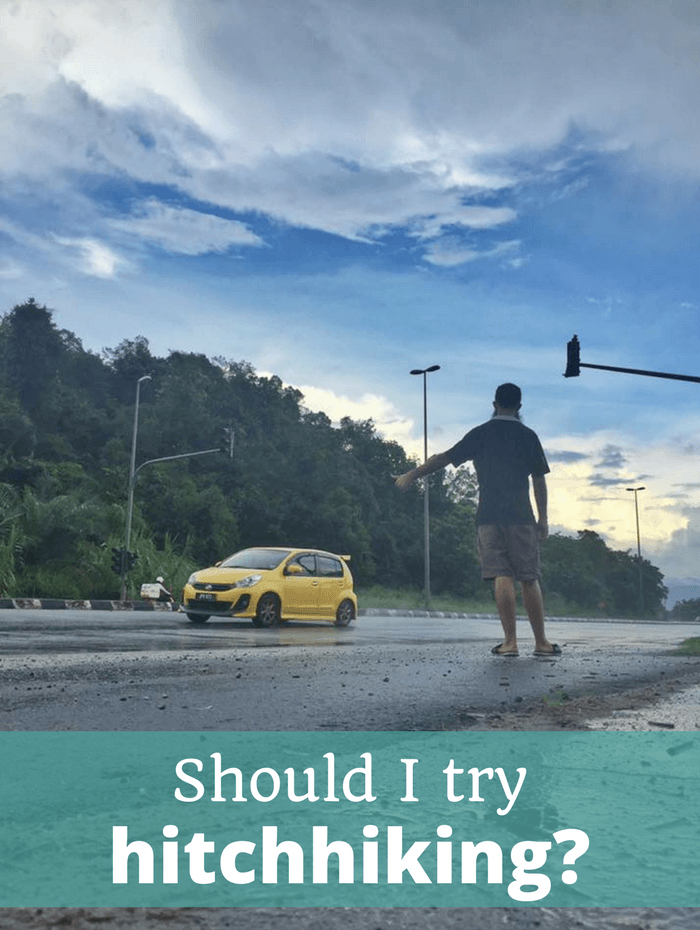 The following are a handful of the life lessons I’ve learned from some of the 70-odd rides I’ve taken.

There are two sides of trust in all relationships (especially hitchhiking)

Side note: It’s crazy how often the person giving you a ride will mention how hitchhiking in their country is dangerous as their people are not nice.

As I throw my backpack on the backseat and jump in the front seat with my day bag, they have no idea what’s inside either bag. Yet they trust me, and I trust them. They have no reason not too. We are both putting faith in each other to be reasonable humans with no ill intentions.

The number of people who text and drive is insane

The one thing that scares me most when in the car when hitchhiking is people texting and driving. The feeling when the truck driver is looking down to send a text, drifts to the side over the white line only to correct the steering wheel when the wheels thunder over the reflector lights on the ground is not fun at all.

It’s scary enough then, but it’s also scary to see how many people aren’t looking at the road as I’m standing roadside trying to thumb a ride. That text can wait.

Some people are great at teaching English abroad, like Amanda did in Japan. There have been a few rides when the reason the person picked me up was because they wanted to practice their English. The first time I ever hitchhiked this was the case. Fortunately there was four of us trying to get back from the Great Wall of China and they did most of the teaching. When this is the case, and it’s only me, I do my best to help them but WOW, I get frustrated at not seeing instant results. Maybe I don’t have the right personality for it? All I know is it’s not easy, so full respect to those who teach for a living.

Smiles are attractive, we should all be able to smile comfortably

Everyone can relate to a resting b*tch face, but why can’t we have a resting smile face? I remember early in my hitchhiking days, smiling was so awkward. It wasn’t natural, it was fake, and felt weird. But it’s a skill that I had to practice, and I now feel comfortable smiling all the time. Being able to see strangers smile when they see your smile is so cool, and might make their day that little bit better.

Football is a universal language

When I’m stuck for conversation thanks to the language barrier one word I can rely on is football (said with the intent of a question as in ‘do you watch football?). Football really is a universal language. So many times I’ve seen the eyes of people light up when I say the word as we’re able to list off a few worldwide players, and name a few teams. The conversation doesn’t go deep, but it’s a good way to break the tension.

The day I discovered Hitchwiki, the Wikipedia for hitchhikers, was awesome. It’s a crowd sourced site detailing the best place to hitchhike from most major cities around the world. Pretty much everyone I’ve met who hitches frequently calls this site one of their bibles. The internet is full of crap we don’t need but when used right, the internet is the best.

If you want to learn to be patient, hitchhiking is wonderful and serendipity is the best

I was in Romania trying to get to a small hotel I’d found on Booking.com. My first ride pulled over in a few minutes and left me in a good position to make it to the hotel on the next ride. What I wasn’t expecting was just only three cars going down the road over the next two hours. The hotel was within walking distance, about 9km, but I wasn’t sure what the conditions would be like and my confidence around dogs is still non-existent so I don’t like walking isolated roads so much. I decided to wait it out, at worst I could go back to the hotel where I started the day.

Waiting on that corner tested my patience. There wasn’t even much passing traffic, the only thing of note was the convenience store out of good people-watching range. Not that there were many people there to watch.

The story gets long, but in a nutshell a Christian Youth Camp adopted me for the day and I ended up travelling with them to Timisoara. I never got to see the hotel, but as my friends Paula and Gordon have as their travel site’s tagline it’s all about serendipity.

Time is our most valuable asset

Another event on the ride from Izmir to Canakkale was dinner time. I managed to understand he wanted to meet up with a friend for food. That was awesome. Turns out they hadn’t seen each other in 25 years! What I thought was going to be a 30 minute break turned into a 157 minute break. Yet as it was getting closer to sunset, I didn’t want to leave the ride, knowing I’d get to Canakkale eventually. But it’s amazing how much it felt like a waste of time sitting there for over two hours not being able to do anything because of the language barrier. I don’t regret those two hours at all, but wow, there was so many other things I could have been doing.

A few final thoughts on hitchhiking

There are lots of things I recommend people do once in their lifetime (such as the Trans-Siberian) but one thing I don’t tell people to do is hitchhike. It’s not for everyone.

But if you’ve got the itch to try hitchhiking, give it a go. You’ll learn a lot of lessons, big and small, every time. A few tips for your first time:

If you’ve got any questions about hitching, leave a comment below or get in touch via my contact page.

Fabulous stuff, Jub. One of my favourite things to do when I travel is to find ways to meet locals, and learn about the normal ways of life in different countries – and clearly you would learn a lot about that hitchhiking! Thanks for offering to share your experiences. And you can all find out more about Jub at his blog which is especially for good for anyone who loves travel AND sports!

Other lessons from travel:

Here’s a collection of some of the other posts I’ve collected about the lessons we learn from travel:

Do you really like green tea? Lessons from Japan and meeting the locals