I’ve never been to Jakarta, but here’s the story of why I’ve always wanted to go. I bet you have your own list of places to visit from the same random kind of connections, too.

So, moving house has turned up so much fascinating memorabilia, and among this is a box full of my all-time favourite books – the very few that I have actually read multiple times in my life. One is Christopher Koch’s The Year of Living Dangerously, a novel which later became a film with Mel Gibson and Sigourney Weaver, no less. 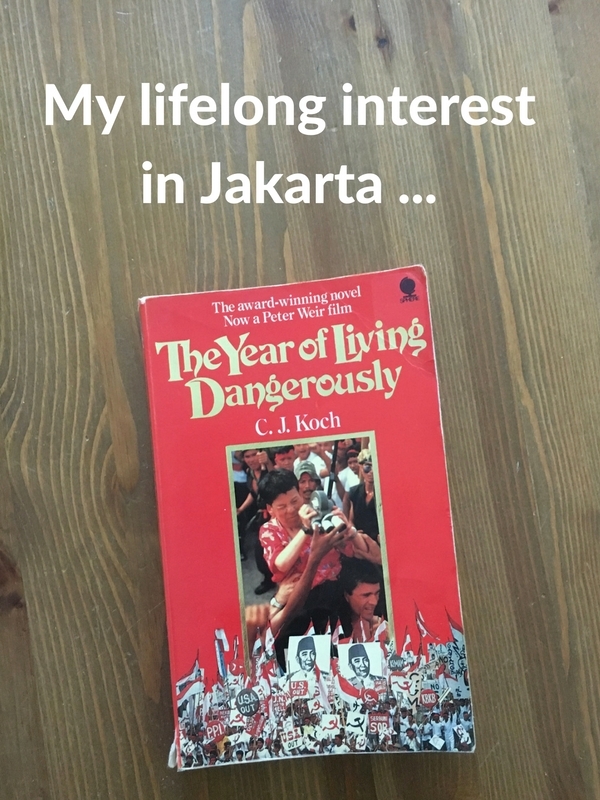 I can’t explain why I loved this novel so much, but as a teenager, when I first read it, I wanted to be a journalist and see the world, so this story of ex-pat journalists living in Jakarta must have hooked me in with dreams of my future. But there was also something about the colourful descriptions of Jakarta which gave me a particularly positive feel for the Indonesian capital.

Even though Indonesia is one of Perth’s closest neighbours – it’s quicker to fly to Indonesia than to the other side of Australia – I’ve only ever been to Bali (and that just once), and never made it to any other part of Indonesia, let alone the capital.

And there’s something about going to a place that has been built up in your mind for decades that makes me wary of going. Places never turn out to be as you expect, sometimes better, sometimes worse – it’s a risk!

The Jakarta of the 1960s described in Koch’s novel is clearly going to be massively different from modern-day Jakarta. It’s a proper metropolis these days, and I love this photo of its skyscrapers by night.

I love it, but it’s not what I would expect. It’s a huge sprawling place, and I love that Lonely Planet calls it a city of “daunting extremes”. While I love the relaxation of the beautiful landscapes, I’m a city girl at heart, and I do like to get to know the most exciting cities really well. I suspect Jakarta will surprise me the way Bangkok did, and be full of contradictions, and probably be a place I want to return to multiple times. (In fact the photo below is of Jakarta, but looks remarkably similar to one I took in Bangkok – perhaps that’s why I’m comparing them already.)

Someone mentioned the Aston Marina Ancol as a place to stay and I’ve been looking up options at Traveloka as they are based in Indonesia. While there might not be a stint in Jakarta on my immediate horizon, it’s close enough that I might just snap a bargain affair and head over there when you (and I!) least expect it.

Your Jakarta tips for me

Do you love or loathe Jakarta? Do you think I’d like it? What do I need to do someday to really get to know Jakarta properly?

Should experienced travellers go to Bali? A note from my own experience

Bali for beginners: I’m a Perth girl who’s never been to Bali before

Packing list for Bali or Penang or pretty much any tropical destination – and my new luggage
Previous Post: « What I miss most about Japan
Next Post: My first travel journal entries – a trip to Kalbarri, aged 8 »