Apparently, it’s the year of surprises.

Having travelled to a few Asian cities before, I had some fairly set expectations for Bangkok. Crazy busy chaos was basically what I thought awaited me – along with some delicious food and fun people.

But just like Iceland did, Bangkok decided to serve up a few things I didn’t expect. Just for fun, I guess!

5 things I didn’t expect in Bangkok 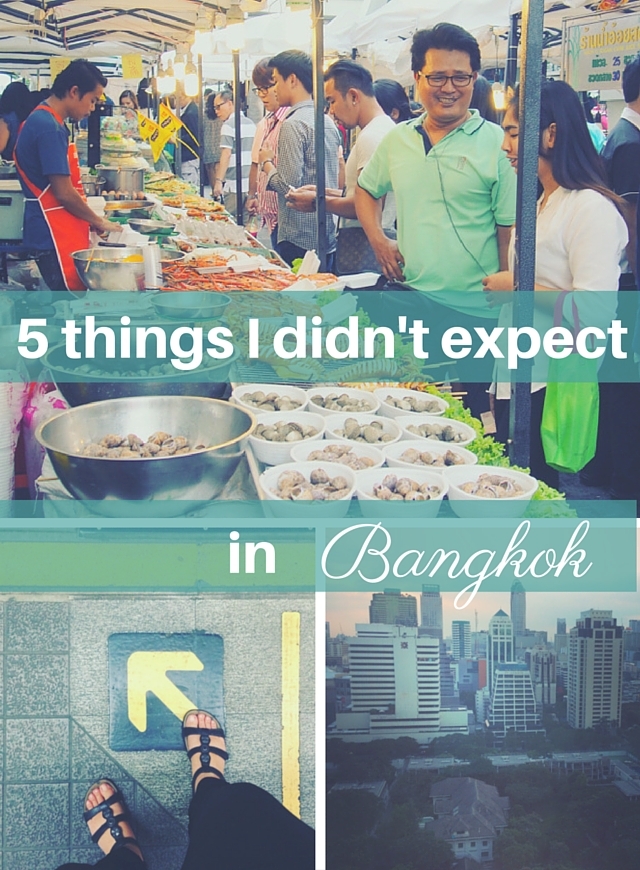 I needed to use both the BTS (Skytrain) and MRT (Metro) train systems to get from my hotel to the conference venue each day (just a couple of stops on each).

When I got to the stations and saw people standing in intensely orderly queues, lined up so that they would be standing to the side of the train carriages doors as they opened, allowing the disembarking passengers to get off easily, and then when the train arrived all the new passengers waited perfectly patiently and nobody put even a toe on the train before all the exiting passengers had gone – wow. I wanted to check my passport stamp and be sure it said Thailand and not Japan.

I did ask around about this and heard that this is a relatively new phenomenon (as are these train lines themselves) but still – it was perfect.

Many people had warned me about the traffic in Bangkok. They’d said to make sure I stayed close to the conference venue because even a short distance could take a crazy long time in a taxi because there’s so much traffic.

Of course, there was a lot of traffic on Bangkok’s roads – but it was neither crazy nor so congested that it would have taken you hours to get anywhere. It was also a pretty easy task to cross the road as a pedestrian, where I’d been imagining Hanoi-style suicide walks out into a billion lanes of cars and motorbikes.

Cities are not necessarily renowned for being leafy green. I guess the tropical weather might help Bangkok stay so lovely and green but clearly, there’s also an emphasis on keeping green space in the city, there are trees everywhere, and the bit that impressed me most was the “green pylons” – for example, at the intersection near my hotel, the bridge pylons holding up the train line above the roads had been turned green by planting plants in a kind of hanging basket arrangement all around them – I watched someone water them all (while the traffic dodged around him … safely?!).

4. No rushing or pushing in Bangkok

It would be wrong to say Bangkok wasn’t crowded – it was, and with all the markets and street stalls set up along the pathways next to the roads, there was often just a single-file-width of space for pedestrians to get through. The same goes for the Jatujak/Chatuchak Markets, which we visited on a Sunday afternoon and it was utterly crowded (but not so crowded that the guys below had to stop their game!).

In Bangkok, I never once felt pushed or harassed as I negotiated the pedestrian traffic – even back here in Perth, people would start acting annoyed in those tight situations.

Somewhat related: there was also no pushy salesmanship going on from any of these stalls, even to obvious tourists like myself. Love that.

5. Dedicated seats for monks on the trains 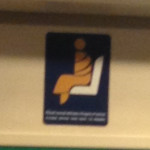 How can you not love a country which has a special symbol showing that you should give up your seat for a monk on a train?

I was a little disappointed that I never got to see this in action (and I only have a really poor quality photo of it because I was trying to be discrete!), but it gives me one more reason to return to Bangkok!

3 things I did expect in Bangkok

The stereotype says that Thai people are kind and friendly. The stereotype is right! 100% right. This lovely man Arty guided our post-conference tour to Koh Kret and typified exactly why this stereotype exists.

Sadly expected but true. I arrived with a cough and it just got worse and worse and I suspect the pollution didn’t help. But at least they have green walls on the bridge pylons! That’s got to help …

Of course, the food I indulged in while in Bangkok was fabulous. Utterly delicious, fresh-tasting, and of course, ridiculously cheap – what more could I ask? It didn’t take Di and I long to track down some amazing Pad Thai and on top of that, the food served up at all the conference functions we went to was fantastic too. YUM! (By the way: some great tips on finding food in Thailand here.)

Have you been to Bangkok?

So, surprises? They were mostly great surprises for me. I can’t believe it took me this long to get to Bangkok, given that it’s pretty close to Perth, I have Thai cousins, I love Thai food, and a billion other reasons. But now that I’ve been there briefly, I’m keen to get back for a proper look around (and to get beyond Bangkok to the rest of Thailand) soon. What about you: did Bangkok surprise you? Do you want to get there soon?

Perth for kids: Fun at the Castledare Miniature Railway

A three-day London layover with jet-lagged kids: Our suggestions

Solo travel as a mother: An alternate reality trip to Bangkok
Previous Post: « German kids’ books: How can I teach my children German?
Next Post: 6 ways the internet has ruined the fun of travel »