Ah, Germany. The land of long lists of rules and home to 80 million devoted rule-followers.

The rules are one of the reasons I love Germany, but as you may remember from last year’s post on the 5 funniest mistakes foreigners make in Germany, the abundance of rules does lead to a high number of mistakes! After returning for a visit again this year, along with getting numerous messages from readers of last year’s post, I realised I already have enough material for another whole post about the errors we non-Germans can unwittingly make.

(As with last year: it’s true that these may not apply everywhere – but they are true in my experience of small-town Germany. And I still love Germany and the Germans. Especially the ones I’m married and related to.)

So here goes – and take good notes if you’re headed to Germany any time soon. 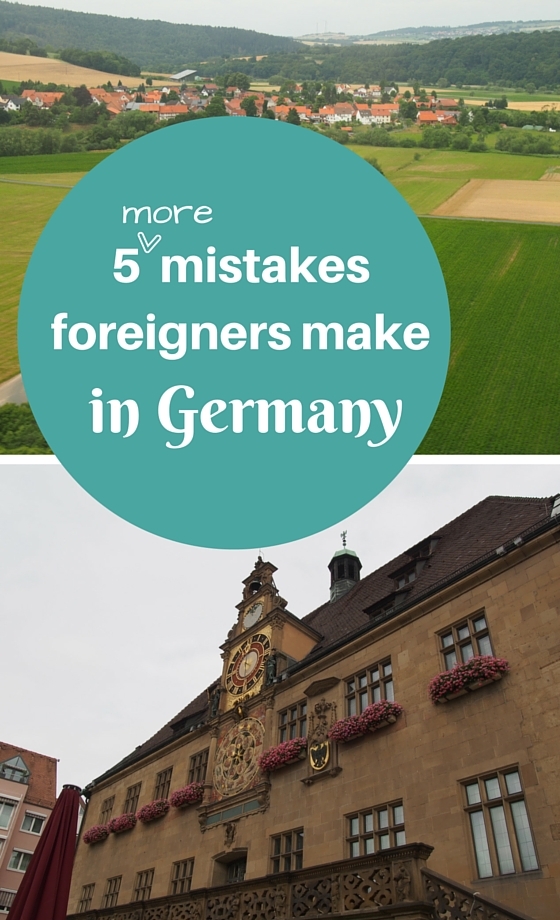 1. Don’t walk on the grass in Germany

I can’t believe I actually forgot this one in the first post. As an Australian who lives surrounded by green parks which we walk across daily on the way to school, this rule is almost distressing! But it’s true – in many parks in Germany there are either signs saying that you need to keep off the grass, or it is simply implied and nobody would walk on the grass.

According to my German husband, this is probably because a lot of the lawns planted in parks across Germany aren’t as robust as the ones we’re used to here in Australia, and they wouldn’t survive well being trampled across constantly. Hmm. Might be true I guess?

My husband still abides by this one, even though as far as I can figure out it arises purely from superstition. If I plan my son’s birthday party to fall before his birthday (common in Australia – and often important for my son as his birthday is close to Easter and the school holidays so it’s really hard to find a suitable party date!), there is all manner of consternation.

So, the rule is – don’t wish someone a happy birthday ahead of the day and definitely don’t celebrate in any way before their birthday actually arrives. Although it’s also important to know that in Germany, if it’s your birthday, you’re expected to be the one who supplies cake.

One of my readers, Sue, told me a funny story – she was working in Germany and her birthday was on a Saturday. She knew the rule about bringing cake, so she brought some – but on the Friday before her birthday! Her colleagues, she said, were appalled!

I’d forgotten about this until a reader called Jessica told me about an incident she experienced in Germany, and then I remembered having the same thing happen. I was parked somewhere waiting just for a minute with the engine still running – I can’t quite remember why, but I know it was just for moment – and a man came up and rapped on my window. When I wound it down he told me off for having the engine running and said I should turn it off immediately!

I certainly never left my car engine running again – in fact, at traffic lights, Germans often turn the engine off while the lights are red. They have an orange light before the red light so you’ve got time to turn it on again – which is important, because in my experience if you don’t start driving as soon as the lights go green, you get honked!

4. Don’t expect a kitchen when you rent in Germany

I got quite the surprise when I first moved to Germany and my new boss helped me look around at potential flats to rent. Most of them had no kitchen! That is to say, they had a room that would be designated as a kitchen, but they didn’t even have the basics like a sink. So while it’s not like there are no kitchens in Germany, it was definitely expected that I would fit it out completely myself. And in the end (mostly since not many landlords wanted to take on a peripatetic foreigner who might not stick around long) I had to rent a flat without one and buy a very basic kitchen to get by with.

The theory is that it’s quite common in Germany to rent the same flat for many, many years, so this kind of makes sense. Except it’s certainly not very convenient for people who aren’t planning to stay a decade!

5. Don’t be late in Germany

It won’t be a surprise to anyone that I mention punctuality in conjunction with Germans, I’m sure. But the reason I mention it is because there are a couple of specific reasons that can mean foreigners end up being late accidentally – I know this, because this happened to me more than once!

It’s most likely to happen after you’ve been there for a while or if you already have some grasp of the language. Across Germany, if they want to talk about a time that is (for example, to us English speakers) “half past three”, the German language uses words which translate to “half four”. Given that I have British friends who actually use the phrase “halb vier – half four” to mean “half past four”, they would be even more confused, but even for me, I always have to think twice about “translating” the time. And if you’re in a hurry or not paying close attention it’s easy to get muddled and arrive an hour late.

In some parts of Germany – and especially in Swabia/Schwabenland where I lived – they have an additional confusion which really got me tricked because I could never remember what it actually meant. They say, for example, “drei viertel sechs – three quarters six” – and this actually means “three quarters of the way to six”, or 5.45. I once had a car full of people waiting an entire hour for me to show up to meet them because I got completely bamboozled by this phrase!

Do you know any more mistakes foreigners make in Germany?

I’m sure there are more. Tell me about them? I’m wondering if I can come up with enough traps that foreigners fall into to compile yet another post on this issue next year!

The shock of no culture shock on arriving in Germany

Guest post: 5 things my daughter is getting out of living abroad (whether she likes it or not)
Previous Post: « Sunset cliches: how to make your travel journal interesting enough to read again
Next Post: Travel Journal School opens today! »