Packing a suitcase half full of toys for your kids when you travel is not the answer to a peaceful trip abroad – this I have learned through trial and error over the last four years. On our trip to Penang I think I got the child entertainment packing list just right, and I thought I’d share one of my favourite tips which might help others preparing to travel with kids: you need to pack paper, scissors and sticky-tape (or Cellotape depending on where you come from) and you will be set!

“You will be set” is a big statement, I know, but let’s just say, these items helped my three-year-old to entertain himself for many hours during our two-week stay in Penang. He is a generally creative type, I must admit, and I also frown upon noisy battery-operated toys (I know, I’m a mean mum) so he is used to making up stuff to play, but I think that all kids can be persuaded to try some of this stuff out, especially if they can see they’re allowed to make a bit of a (clean) mess!

You can see in the picture above that my son is very much of the “I’ll do it myself” school and while the roads he cut out of the coloured paper I’d brought are somewhat varying in shapes, he’s managed to draw some pedestrian crossings (possibly in the wrong direction, but let’s overlook that), stick a bunch of them together, stick them to the carpet too (no damage done, Mr Hotel Manager) and even stick a ramp going up to the bedside table and voila – he played cars here for ages. There was definitely a time when I would have been called on to help him cut, draw, stick and so on but he’s had plenty of practice and loves to do this kind of construction himself.

The bit that I love best is that when he’d made the roads he quizzed me about the name of the road our hotel was on and tried to use local names in his (endless!) commentary of what his cars were up to. The only down side was packing up the roads before we went out so that housekeeping could clean our room but rebuilding his roads later on was probably just another part of the fun.

On a different day – one when we’d just stopped at the street-side fruit and veg stall, if I remember rightly – he asked me to help him cut out some red circles, and he did the rest and created a gallery of paper fruits and vegetables.

This turned into even more the next day when he asked me to help him cut out some circle shapes to be plates and he set up a restaurant. He used the carrots and cherries from the previous day and added the souvenir plastic star fruit he’d begged me to buy and he soon had a feast ready for me and his bear. (Note to self: make the bed before taking these kind of pictures in future). 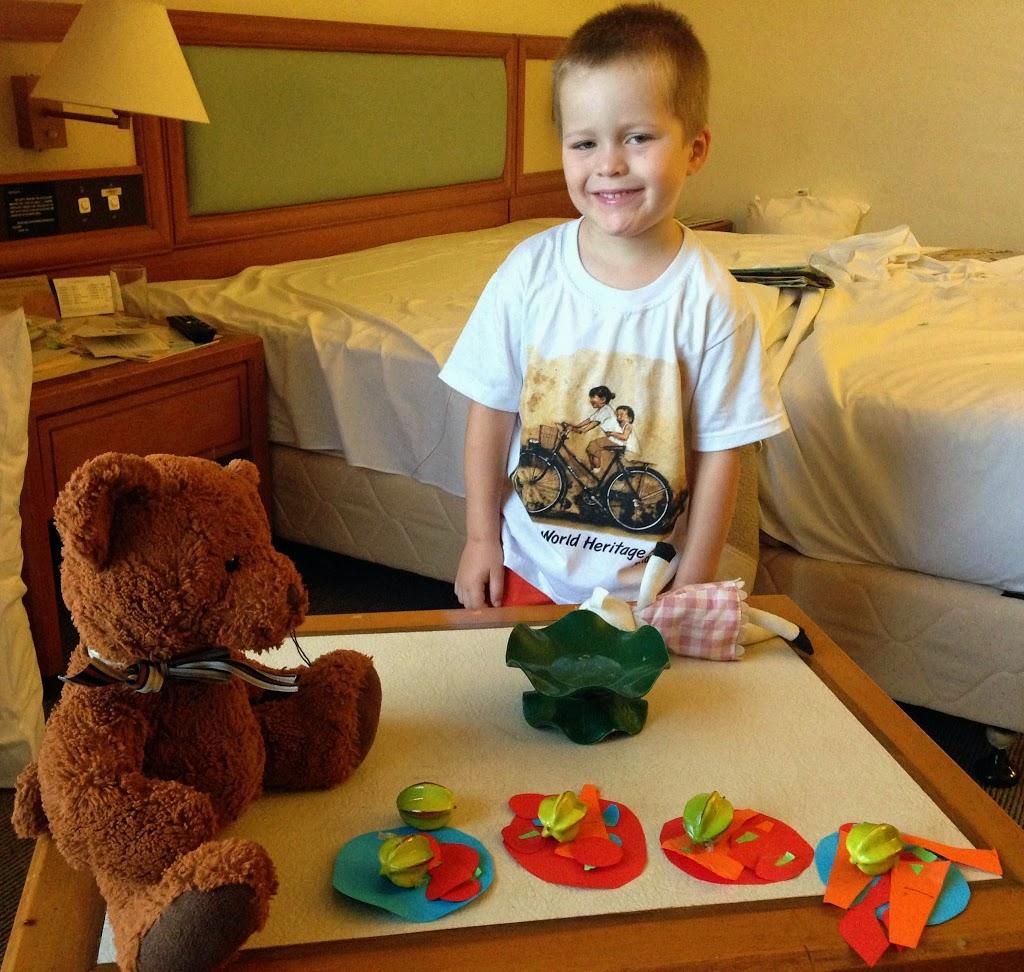 Your child might do an entirely different thing when faced with a bunch of coloured paper, sticky-tape and some scissors, but as long as it involves creating both a bit of downtime for the parents and creating something fun then all is good with the world. We added a few things to our in-hotel kit by going shopping at one of Penang’s Daiso stores (Daiso is a Japanese hundred-yen shop, one I’d very much missed since my time there, full of all kinds of delights for next to nothing), and since we were staying in the one spot for a full two weeks this was well worth it.

Don’t forget, of course, that the airline won’t like you taking scissors on the plane so make sure you put them in your checked luggage, or your plans for kid fun may go awry!

Packing list for Bali or Penang or pretty much any tropical destination – and my new luggage
Previous Post: « How to choose a holiday destination: Penang thanks to our Malaysian friends
Next Post: Travelling close to home: Camping in the Perth hills with kids »