It’s quite a common search term for visitors ending up on my site: “do young children remember trips”? and I really fervently hope that when parents land here while thinking this question that they realise YES, children can remember enough of a trip, and more importantly learn enough from a trip, to make it worthwhile. Let me tell you why … 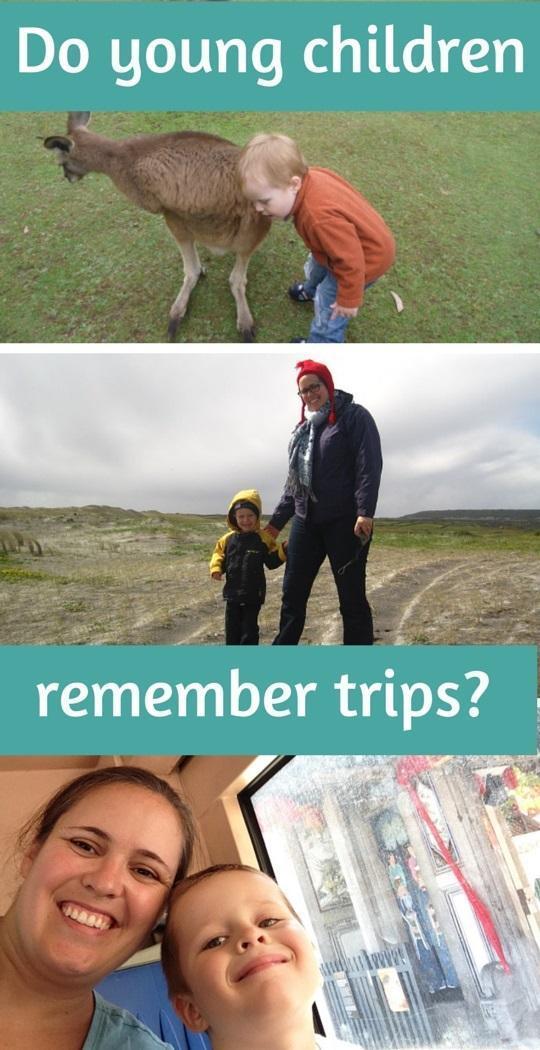 My own memories of childhood trips

When I was very young, our family trips were based only on weekends in our shack in Mandurah a little south of Perth, and visits to my grandparents’ farm in Kendenup, four hours south. I was school-aged by the time we did some other trips: I distinctly remember staying in motels in Pemberton and Denmark, because I was so fascinated by the breakfast being delivered on a tray, pushed through a special flap next to the door of our room. I kept my first travel diary on a road trip to Kalbarri in the north aged about seven; I still have it, and it mentions a lot about what we ate for breakfast and not a lot more.

Our first enormous adventure, and the first time I went on a plane, was our six-month campervan or motorhome trip around Europe. This was a crazy big deal, and I’m still in awe that my parents managed to arrange this in pre-internet days. I was nine, and I remember a lot about this trip. Curiously, my sister was seven and says she doesn’t remember much; I suspect it’s a combination of her being a little younger and of me being very motivated to remember it because travel’s such a passion of mine. And what is this memory anyway, really? Some of it is definitely a memory of the stories I’ve been told by my parents since, and some is memory that is jogged by physical souvenirs and the diaries I kept. I certainly don’t remember details the way I could tell you all about my trip to Penang earlier this year.

I don’t remember all the details: but that trip to Europe still changed my life. I’m sure you wouldn’t be reading this travel blog if my parents hadn’t done something a little crazy and taken two under-tens out of school for half a year.

My son’s memories of trips, aged zero to four

I know my son can never remember his own actual experience of his first trip, when we took him to Germany and Switzerland to meet his family at the tender age of just four months. But today, at four years, he knows we took this trip, and he loves to look at the photos of it, and asks me to tell him stories about it. Likewise, he doesn’t remember much about his experience of Tasmania at around 18 months of age (I’m glad he can’t remember the emergency trip to hospital when he burnt his palms on hot playground equipment there!).

When he was three, we had a month in Europe and there are lots of moments from this trip that he still talks about, like chasing the rubbish trucks in Vienna and staying with Maria and Jack in Ireland. There are lots of things he doesn’t remember, as well, because obviously they were less interesting to him as a three-year-old. Just before he turned four, we had a couple of weeks in Penang and that’s a trip that’s still very clear in his mind half a year later. Whether he’ll remember much about these trips as he gets older is something I can’t predict, but I’ve made up photo books of the trips that he loves to read, so in some form or another, these memories will remain.

Does it matter if kids can’t remember their trips?

I often hear people say it’s not worth spending the money to take their kids on a trip that they won’t remember. (I had a business English student once who went on all these amazing trips with his wife but left the kids at home, aged around eight and ten, because he said they were still to young to remember it.) I have to say, I just can’t agree with this attitude. Even if a child doesn’t remember much of the detail of a trip, think of all the things they are learning that will change the way they see the world and think about people: they can observe other cultures, hear other languages, try different foods, play with other kids who have a totally different way of life to them. If they don’t actually recall the moment they stood atop the Eiffel Tower, so what?

I think there are plenty of advantages to starting a child’s travelling career young. Simply getting them used to planes and buses and museums and galleries sets them up for a lifelong love of travel and a lot less resistance to family travelling when they start to get old enough to be able to stay home. And complaining that they don’t want to come on the next trip is pretty much the worst case scenario – much more likely is that you’ll raise a child who appreciates diversity, is brave about trying new things and will go on to explore the world long after they’ve left home. That’s what I wish for for my son.

How to travel with young children and stay slightly sane

Five years of travel for my favourite young traveller

Abingdon Miniature Village, Mandurah: Kids choosing the destination in Western Australia
Previous Post: « Why tourists should visit the Perth Royal Show (and how pigs fly)
Next Post: Life as an ESL teacher: When Pedro tried to cheat at his English test … »